Father of the year, he is not. 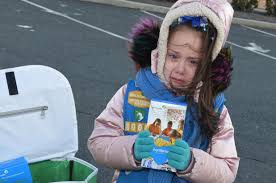 Brian Couture, of Forest Grove, was sentenced Monday to 18 months of probation, 80 hours of community service and restitution as part of a plea deal with the Washington County District Attorney’s Office.

The 40-year-old had been accused of lying to police back on March 6 — when he called 911 and claimed his house had been broken into.

When officers arrived, they found the home “ransacked and spotted blood strewn about the residence,” according to prosecutors.

“[Couture] told law enforcement at the time that someone broke into his home and assaulted him,” the district attorney’s office said in a press release Monday. “Couture’s work laptop was damaged and approximately $700 was missing from a jar containing his daughter’s cookie sale proceeds.”

Police opened an investigation and “quickly spotted inconsistencies in Couture’s story and began to challenge his account of what happened,” according to cops. He eventually confessed about what really went down.

A local judge imposed a $100 fine on Couture, with his amount of restitution to be determined at a later date. Girl Scouts officials say they’re following “normal procedure to collect on funds owed.” A spokeswoman told KPTV that “around $740″ was unaccounted for.

“We have been in contact with the Forest Grove Police Department and are working with them to resolve the matter,” the spokeswoman said. “The stewardship of Girl Scout troop funds is a top priority for our organization, and that is our focus in this matter.”